Life in the Desert

Think about deserts… What words pop into your head?

Do those words describe all deserts? Well - it is true that deserts receive very little precipitation (rain, snow, sleet & hail). However, not all of them are hot and they certainly cannot be described as lifeless!

Earth’s deserts have also been called wildernesses, which means that they are not farmed and are hard to live in, but they are not uninhabited. In fact, more than 1 billion people live in and around the world’s desert places.

In this final article of Geography in the News Issue 24 we are going to focus on these desert people. We will look at the way that they have interacted with their environments and adapted to the harsh, unforgiving conditions.

We will look at three different deserts around the world. Let’s start with the least populated desert of all: 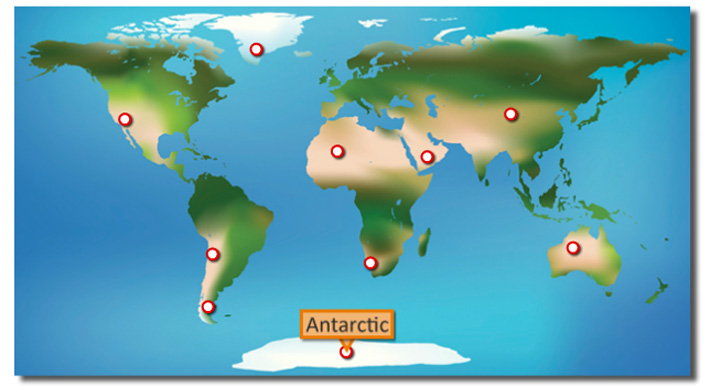 Antarctica is the largest desert on Earth and is covered by thick layers of ice and snow. It is dry because the very strong winds remove water from the air and the extremely cold temperatures result in high atmospheric pressure and clear blue skies.

No clouds = no rain or snow!

Despite the freezing cold and hurricane-force winds, around 1000-5000 people live on and around Antarctica each year. The first communities were established on islands used as bases for seal hunters and whalers in the 18th Century.

The only people living on Antarctica itself are scientists at research stations dotted around the continent. These stations are supplied by the countries that set them up so you could question whether the people are really a ‘permanent population’. That said, at least ten children have been born in Antarctica in the last 35 years and it seems that Antarctica’s population is here to stay. 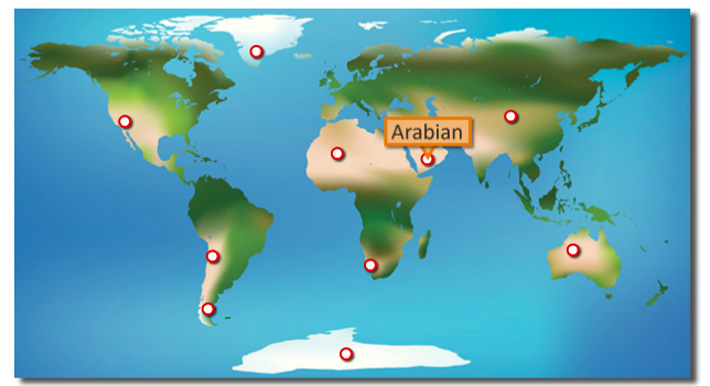 The world’s fourth-largest desert is located in the Middle East. It covers at least part of 8 countries:

At the centre of the Arabian Desert is Rub’ al Khali, ‘the empty quarter’, which is one of the largest bodies of sand on Earth. However, although it is very hard to live there, it is home to a rich human culture stretching back for thousands of years. 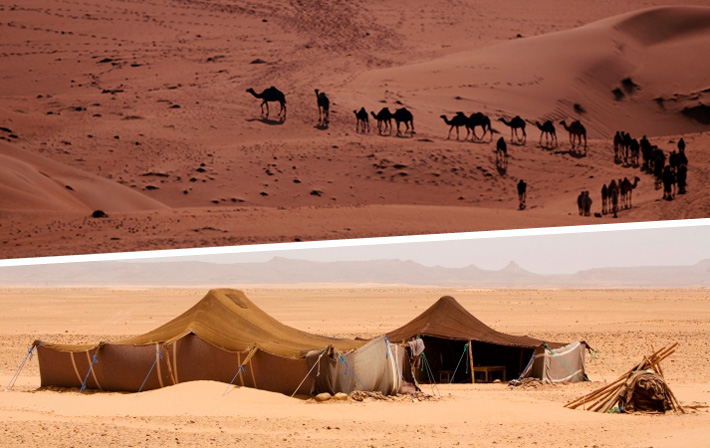 The first human communities in Arabia began around 20,000 years ago. Nomadic families and tribes moved around the fertile land in the centre of the region, first hunting and gathering then later grazing their animals.

In the Arabian desert oases, green areas around springs and other sources of water, helped nomads to explore the wildernesses by traveling from one oasis to the next.

The largest oasis on Earth is Al-Ahsa’a in eastern Saudi Arabia. 1000 years ago it was one of the largest population centres in the world. Lots of natural water springs in the area meant that people could grow crops and fruit.

Al-Ahsa’a is still famous for its dates as well as growing rice, corn, wheat, lemons and other fruits.

As we mentioned at the start of this article, when people think of the desert they think of heat and dry sand. Maybe they picture camel herders wearing long robes and headscarves, traveling across vast sand dunes under a burning sun.

Well, the traditional Bedouin tribes of the Arabian Desert fit just this description (even though they may travel with Land Cruisers and satellite phones these days).

Until 50 years ago most people in Saudi Arabia, the country which contains most of the Arabian Desert) were nomads. They travelled across the desert with their camels, goats and sheep using wadis (desert rivers that only fill when it rains) and oases to graze their crops.

Since the 1960s the number of nomads has fallen rapidly and less than 5% of the population of Saudi Arabia is now nomadic. There are trillions of barrels of oil and gas under the desert which has bought huge wealth to many of the countries around it. Large cities have been built, especially in the north-west of the region.

Man-made oases of concrete, steel and glass have grown up in the desert. The tallest man-made structure in the world is the Burj Khalifa skyscraper in Dubai which stands 829.8 metres high. Imagine what a camel-herding nomad from 100 years ago would think if he saw a tower over half a mile high sticking out of the desert! 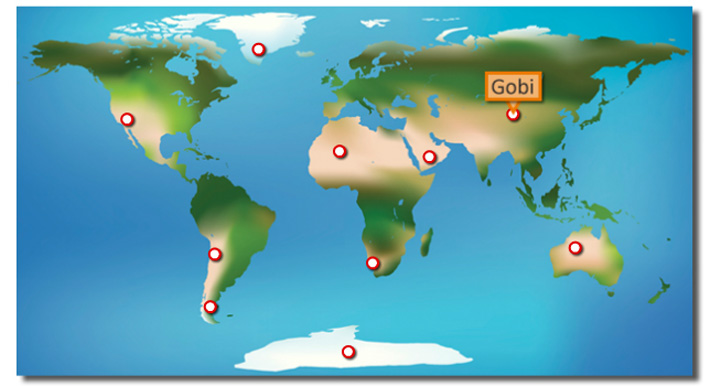 The Gobi (which means ‘desert’ in Mongolian) is in central Asia. It is the fifth largest desert on Earth and the biggest cold-winter desert in the world. It lies north of the Himalaya mountain range which blocks rain clouds traveling north from the Indian Ocean. This is why it is also called a ‘rain-shadow’ desert.

One of the driest parts of the Gobi Desert is the Eastern Gobi desert steppe which has no trees, only low hills, and is dominated by vast flat areas. Wind-blown dust fills dips and dry and the temperature goes from -40°C in the winter to as high as 50°C in the summer.

Herding livestock, which is also called ‘pastoral nomadism’, has been going on in the Gobi Desert for centuries. One animal, more than any other, has shaped the human history of Central Asia, including the Gobi Desert – the horse.

Horses have been ridden by humans for around 5000 years. This allows nomads to travel widely and quickly, as well as providing milk and meat for food. Other animals like goats and camels are herded as well, but the horse has been an important part of the history of the Gobi for another reason – war!

Throughout history, the nomadic tribes of the Mongolian Steppe have formed empires to rule vast areas of Central Asia, including the Gobi Desert. The first of these was the Xiongnu, who fought many battles with the Han Dynasty of China over 2000 years ago.

Both sides used vast armies of tens and hundreds of thousands of cavalrymen (horseback warriors), The infantrymen, who fought on foot, also travelled on horses to allow them to cross large distances quickly.

In 119AD one particular battle was not just won by the horsemen - Gobi Desert itself had a role to play. The Xiongnu cavalry surrounded a section of the Han army, who used their chariots to create mobile fortresses and defend themselves.

By the end of the day, the battle was at stalemate, but as dusk began a sandstorm blew across the battlefield making it almost impossible to see. The Han sent in their remaining cavalry through the flying sand to attack the surrounding Xiangnu army. The Xiangnu were defeated and chased across 100 miles of desert by the Han dynasty’s horsemen.

The use of horses to fight wars and cover large distances in the desert and on the steppe became a normal part of life in Central Asia. The harsh environment of the Gobi Desert and Mongolian Steppe had bought about a way of life which, by the 13th Century AD, had helped Genghis Khan and his descendants establish the mighty Mongol Empire, the largest land-based empire ever!

Even the harsh East Gobi desert steppe was no longer a barrier. Nomads and merchants used horses and camels to establish trade routes across the Gobi desert between Mongolia and China. Even today, almost one third of Mongolian households earn their living by breeding livestock and many of them spend at least part of the year as nomads, traveling across the steppe in search of the best grazing grounds.

Trade routes across the Gobi

They still get meat and milk from their horses too, although these days you can buy the horse milk in supermarkets as well. That’s modern life in the wilderness!

Now that you have finished reading all three articles in this edition of Geography in the News, why not go back to article 1, “Deserts”, and try the quiz again. Then come back and try the pupil activity below.

Working in the same groups as for the activity in article 2 of this issue of Geography in the News, prepare a report about the people and communities living in the desert you researched last time.

There are lots of resources on the internet to tell you about people who live in desert places. Once you have decided which nation, ethnic group or tribe you want to write about then start by using some of the websites listed below to find out more about them.

Your report should include:

You can finish your report by saying what YOU think the future might hold for your chosen community – how might things change, for better or worse, over the next 50-100 years?

Present your report professionally – include relevant pictures, diagrams and graphs to give evidence of what you have written. Give in your finished report to your teacher for marking.

There are lots of websites that can help you, as well as encyclopaedias and books that you might find in your school or town library. Travel books often contain information about traditional cultures in the countries they are written about.

Here are a just a few websites to give you some ideas and get you started. Remember – check your facts! Just because you read something in one place, doesn’t mean it is true. Check another source as well. 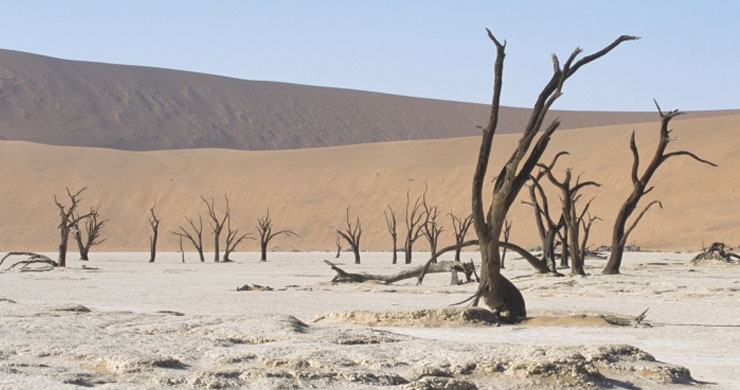 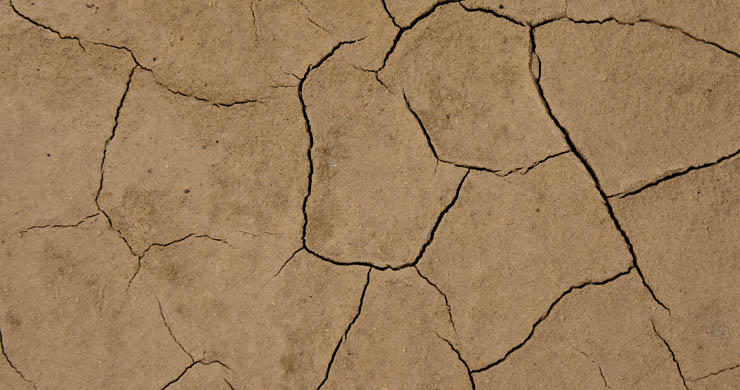