In the first two articles in this issue of Geography in the News we have looked at two potentially hazardous environments - limestone landscapes and volcanoes.

In this final article we look at the reasons why people choose to live in areas of the world where similar disasters could strike at any time.

Living in peril – why take the risk?

There are a number of reasons why, over hundreds of years, people have chosen to settle on or close to limestone landscapes and volcanoes. Some of these are almost as old as the hills themselves, while others are more recent developments.

Both limestone landscapes and volcanic regions have been recognised for a long time as being excellent areas for different types of agriculture, from sheep grazing to olive groves.

Limestone soils tend to be thin, making them unsuitable for planting traditional crops, although there are exceptions (see below).

The limestone uplands of the UK, like the Mendips in Somerset and Great Orme near Llandudno, are mostly grasslands and are therefore used for grazing sheep. The gently rolling hills and ample stone for building walls to separate pastures make it ideal for farmers to keep their livestock.

In France, Italy and New Zealand, among others, limestone areas are being put to a very different use. The limestone rich soils of the Burgundy region of France produce world famous Chardonnay and Pinot Noir wines.

Italian Peidmont wines are grown in marly soil (a mixture of clay and limestone) and similarly the marls of the Champagne region are vital to the production of its sparkling wines.

Limestone is also used as a fertiliser for growing crops on farms all over the world.

Volcanic soils are rich in nutrients which help plants to grow. They provide lush farmlands, although you could be forgiven for thinking that living in the shadow of a fiery monster might be too high a price to pay! However, millions of people would disagree as they make their living on and around active volcanoes.

In Europe, the ash and dust-rich soil from eruptions of volcanoes like Stromboli and Etna in Italy, and El Hierro in the Canary Islands, support olive groves, vineyards and plantations of dates, orange and lemon trees, sugar cane and more. In the photograph below, green tea is grown beneath the snowy peak of Mount Fuji.

Water circulating through ancient lava flows beneath the soil brings minerals to the surface in areas like the African Rift Valley and Mount Elgon in Uganda. Some of the world’s best coffee beans are grown in volcanic soils in tropical regions like Columbia and Guatemala.

It’s not all peachy though – although peaches are also grown in volcanic soils. Large eruptions which produce ash, mud and poisonous gases can devastate farmlands and destroy the livelihoods of many thousands of people in a matter of hours. This happened in one of the most catastrophic eruptions in living memory – Mount St Helens in Washington State, USA (pictured below).

Even more recently, Mount Nyiragongo in the Democratic Republic of Congo has supported agricultural communities for hundreds of years. In 2002 a devastating eruption of lava, ash and gas caused 400,000 people to be evacuated from the region, destroyed farms and banana plantations and demolished over 4500 buildings in the nearby city of Goma. 147 people were killed.

Both volcanoes and limestone landscapes provide valuable natural resources for industries like manufacturing and construction as well as for agriculture.

Limestone is a vital part of the construction industry and is mined in vast quantities and used to produce cement, mortar and concrete. In Trefil in Blaenau Gwent limestone is still being quarried today, although some of the smaller quarries are no longer used except as locations for movies like Wrath of the Titans and the BBC TV series Doctor Who.

Trefil Quarry: one of the key quarries exploiting the north crop of the South Wales Carboniferous Limestone (c) A. Bowring

Limestone has many other uses in steel and glass-making, fertilisers, air-pollution control, medicines, cosmetics and toiletries like toothpaste.

Limestone blocks are used to build everything from dry-stone walls on the hills of South Wales, Somerset and Yorkshire to cathedrals and grand buildings like the Palace of Westminster in London (which is a mixture of sandstone and limestone).

Using limestone for construction is nothing new. The Great Pyramid in Giza, Egypt was built more than 4,500 years ago using over 2.3 million limestone blocks. Even further back, stone age settlers in Africa, the Middle East, Asia and Europe found flints in limestone to use as tools, as well as using the rock itself to create beautiful carvings like the mask in the picture below which is around 9,000 years old.

A neolithic limestone mask discovered in the Judean desert, Israel and the Great Pyramid at Giza, Egypt

Faults and cracks in limestone are important; when water circulates through them, minerals are deposited. These include copper, which have been mined from the limestone hills of Great Orme in North Wales since the Bronze Age right up to the present day.

Volcanic rocks like dark, smooth basalt are used for building and decorative stonework all over the world. Sometimes called ‘dhustone’ (dhu comes from the Welsh word ‘du’ meaning black) basalt is still being mined at Clee Hill in Shropshire.

Minerals like sulphur and metals like tin, gold, silver and copper are common in volcanic regions. The intense heat and pressure in the Earth’s upper mantle causes carbon atoms to form diamonds, a process that takes hundreds of millions of years. Volcanic activity that brings magma from deep under the Earth’s surface can carry these diamonds to the surface.

Diavik diamond mine in Northern Canada

Tourists are drawn to limestone and volcanic landscapes for several reasons:

Limestone uplands are often home to rare and endangered species of plants and wildlife. The High Brown Fritillary is the UK’s most-endangered species of butterfly and is only found on the Morecambe Bay Limestones in northwest England. In the USA, Cushenbury buckwheat is at risk because of limestone mining.

These rare species draw nature enthusiasts to limestone regions. Unfortunately, limestone is easily eroded and the landscapes must be protected to ensure that the fragile ecosystems survive.

The rolling hills, steep cliffs and narrow gorges on the surface of limestone uplands attract walkers, climbers and cyclists, while the extensive caves and tunnels beneath the ground draw in curious tourists and serious cavers from around the world.

Tourists visiting volcanoes is nothing new. In the mid-18th Century wealthy young men from around Europe would take a ‘grand tour’ as part of their education. Pompeii and Herculaneum, two towns destroyed in the same eruption of Mount Vesuvius in 79AD, were both part of the tour. The fittest and bravest of these adventurers might even climb the volcano itself. 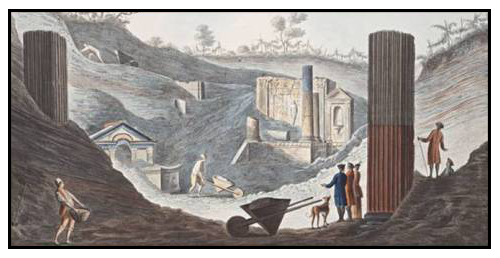 Discovery of the Temple of Isis at Pompeii, from Campi Phlegraei, Vol. 2 by William Hamilton (Naples: 1776)

In Iceland, the numerous geothermal pools heated by the Earth itself attract many thousands of visitors each year who come to relax in the hot water while enjoying the spectacular landscapes (but not the smell – the water stinks!). The Blue Lagoon (pictured below) is just one of many geothermal pools on the volcanic island, and there are many others all over the world.

The sharp, jagged peaks of dormant and extinct composite volcanoes have attracted climbers for years, while more recently the volcanic activity itself has become an attraction.

Brave (or foolish) tourists and scientists get close to the bubbling lava lakes on shield volcanoes like Mauna Loa and Mauna Kea in Hawaii, while the spectacular eruptions of Etna and Stromboli in Italy bring visitors from far and wide. Watch the videos below to see volcanoes in action.

Video 1: Spattering in a lava lake on Hawaii

Video 3: In Yellowstone National Park, the site of a supervolcano, the geyser ‘Old Faithful’ thrills its spectators with regular eruptions of water heated by volcanic rocks far beneath the surface.

Video 4: Mount Etna’s eruptions over the past few years have attracted many visitors, despite the dangers. They are rewarded with some spectacular sights, including Etna’s very unusual habit of blowing smoke rings.

Take a virtual fieldtrip using a GIS like Google Earth and visit one of the locations mentioned in any of the three articles in this issue:

Find out about the area around it, including the industries and activities in the local area (agriculture, mining, tourism, leisure etc).

Write a short report for an article in a newspaper about the area that you chose.

You might want to write about a particular event like an eruption, landslide or a collapsed cave. Or you could write about more general changes to the environment (e.g. erosion and environmental damage) and the communities living there.

Make sure that you consider the effects, positive and negative, over both short and long timescales. 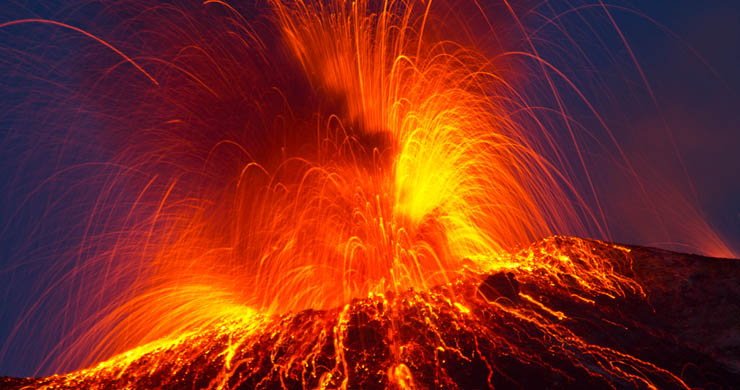 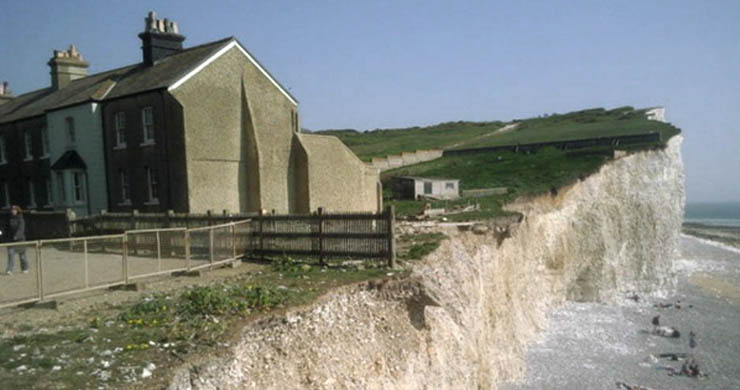